A new study has found that parks in low-income and majority nonwhite communities are smaller and serve a larger number of people per park acre. People are seen here relaxing in May in Brooklyn’s Domino Park. 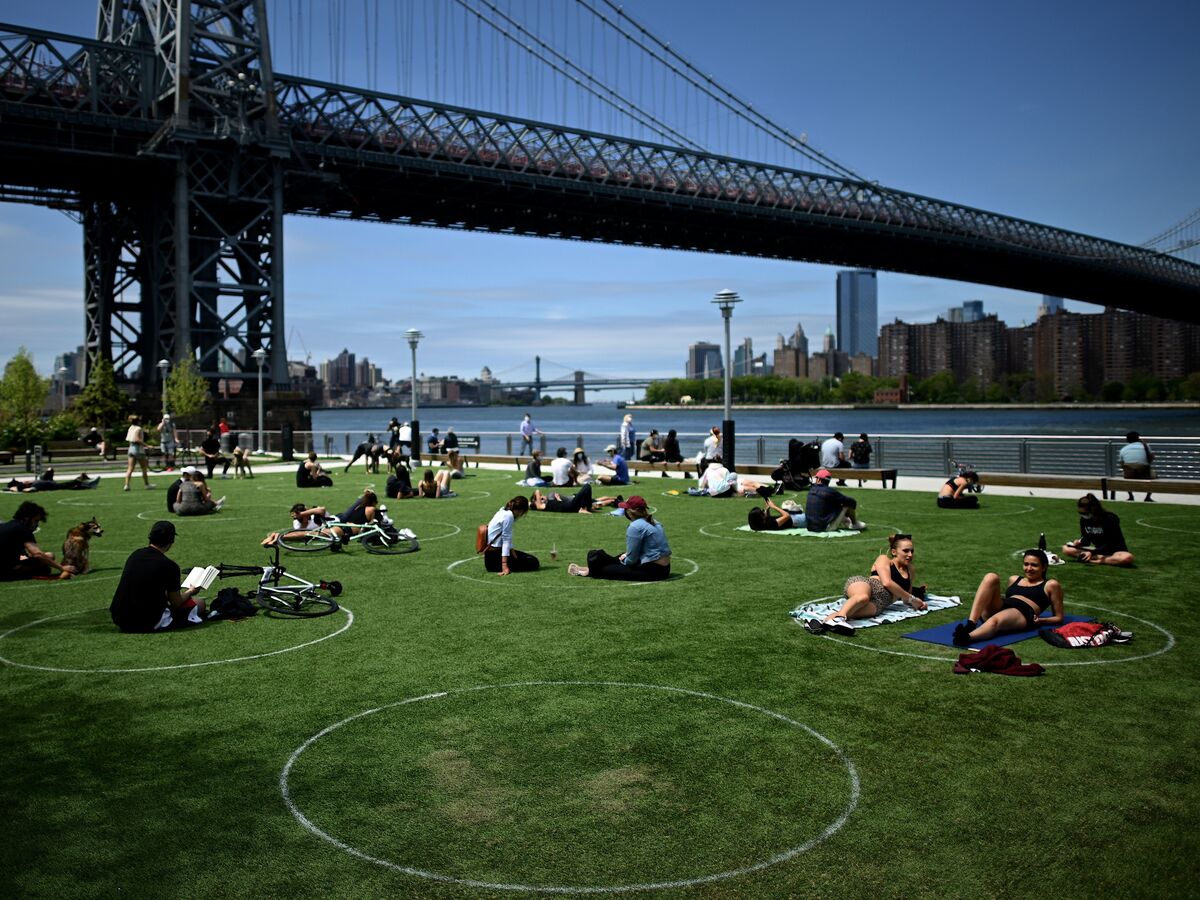 A new study has found that parks in low-income and majority nonwhite communities are smaller and serve a larger number of people per park acre. People are seen here relaxing in May in Brooklyn’s Domino Park.

In the midst of another hot summer and an ongoing pandemic, public parks are vital refuge. But a new study has found that access to parks in the U.S. differs sharply, according to income and race.

A study published by The Trust for Public Land found that parks serving primarily nonwhite populations are, on average, half the size of parks that serve majority white populations, and potentially five times more crowded.

As temperatures rise due to climate change, spaces to escape from the heat can be a matter of life and death. Heat waves kill more people in the U.S. than any other extreme weather event, including hurricanes, tornadoes, or floods. More than 65,000 people visit an emergency room for heat-related illness each year, and an average of more than 700 people die of heat-related causes annually.

Trees and other plants help cool the environment, and are vital to reducing urban heat islands. Shaded surfaces can be 20–45 degrees cooler than unshaded surfaces.

In The Trust for Public Land study, researchers overlaid satellite heat data with census tract data, then wrote software that converts that thermal data from satellite imagery into a heat value. The result was a high-resolution data set for the entire U.S., giving a heat value for every 30- by 30-meter geographic area. (The researchers excluded huge parks greater than 70,000 acres, such as large conservation areas and national forests.)

The study analyzed 14,000 cities and towns, and found that areas within a 10-minute walk of a park are as much as 6 degrees cooler than the areas beyond.

The new data adds to what other studies have found about heat and economic and racial disparities. Last year, an investigation by NPR and the University of Maryland’s Howard Center for Investigative Journalism found that in dozens of major U.S. cities, low-income neighborhoods are more likely to be hotter than their wealthier counterparts.

In this age of social distancing, park size matters. The Trust’s researchers looked at how many people live within a 10-minute walk of each park, and used that figure to determine how many people each park serves, as a proxy for crowdedness. They found that parks serving majority low-income households were on average a quarter of the size of parks in majority high-income areas: 25 acres compared to 101 acres.

And the study’s findings show that when it comes to parks as a refuge from heat, the type of park also matters.

Some American parks are spacious, leafy and green. Other parks are small and covered in asphalt. The latter parks are going to be hotter – and they’re more likely to serve nonwhite and low-income households.

Conversations about park equity and access have tended to treat all parks as the same, says Linda Hwang, managing director of Strategy and Innovation at the Trust for Public Land.

If you assume that all parks offer the same benefits to their communities, “the distribution looks OK. But we know that not every park is the same,” Hwang says. “But we know anecdotally and we know through our own lived experience that that’s just not the case.”

The tiny asphalt-covered pocket park does not offer the same cooling benefit as a big tree-filled park, nor the same space to maintain social distance.

“In low-income communities of color, parks are more often smaller and they serve more people, which can lead to park pressure because of that less park space per person,” Hwang says. “So if it is the case that 2020 is already on track to be even hotter, then that distribution and the size of parks and the concentration of people around them becomes a really significant public health issue.”

So what’s to be done?

One of the Trust’s initiatives involves working with school districts and cities to improve schoolyards and convert them into public parks, by establishing joint-use agreements for the spaces.

“We had a project in Oakland where we sent kids out with laser temperature [sensors],” Hwang says. “I think the day in Oakland was like in the high 70s. And there are temperature readings in the school yard of like 120, 130 degrees. I mean, it’s just awful for these kids.”

The initiative works to make the schoolyards more climate-friendly, by replacing fenced-in asphalt expanses and replacing them with trees, gardens and other features — which help reduce both extreme heat and flooding issues.

José González is the founder of Latino Outdoors, a community and organization for connecting Latinos with the outdoors and pushing for their representation.

He says many studies have shown that communities of color care deeply about parks, are willing to invest in them, and support policy measures accordingly. But the public investment by those in power simply hasn’t matched that level of interest, he says.

“It’s never been a question about caring,” he says. “That leads us to this question of the power structure, to say well, then how are we investing? Why is that gap between high care and concern, and the reality of investment?”

During the public health crisis of COVID-19, González points to all of the things that parks provide: Space for social distancing. Sunlight to kill off potential surface contamination. And an outdoor environment that’s safer than indoors, in terms of virus transmission.

González says more investment in parks in low-income communities of color is overdue. And it needs to be done with care, he says, so that it doesn’t cause what’s called “green gentrification” — in which new parks or urban greening programs cause housing prices to rise, pushing out the communities they were meant to benefit.

Two things are critical to doing park investment right, González says. One is making sure the investments are serving the communities they’re intended to serve.

The second is to look at parks as part of a holistic system, along with housing and education, “so that parks don’t become this out-of-the-blue outlier that you just kind of drop into a community.”

Community engagement and participatory design also avoids building parks according to outsiders’ assumptions about what a community wants. Instead, the community can take part in a more expansive conversation about what a park can be.

“Because often then what ends up being limited is, ‘Ah well, it is going to be another Latino community so we’re just going to put a soccer field.’ And while it may be true that a soccer field is appreciated, it doesn’t mean that they would only care about a soccer field,” González says.

The pandemic is making people pay attention to the inequities that have existed for a long time, González says, and explore what a new future could look like.

“This is an opportunity to continue to see parks as essential, and not just a nicety. In the past they tended to be one of the first things to get cut. You would see with cities: ‘Protect fire, protect police, parks can wait until the very end,’ ” González says. “We can’t afford to continue to do that.”