A screen grab from a social media video shows a tornado tearing through Jonesboro, Ark., on Saturday. 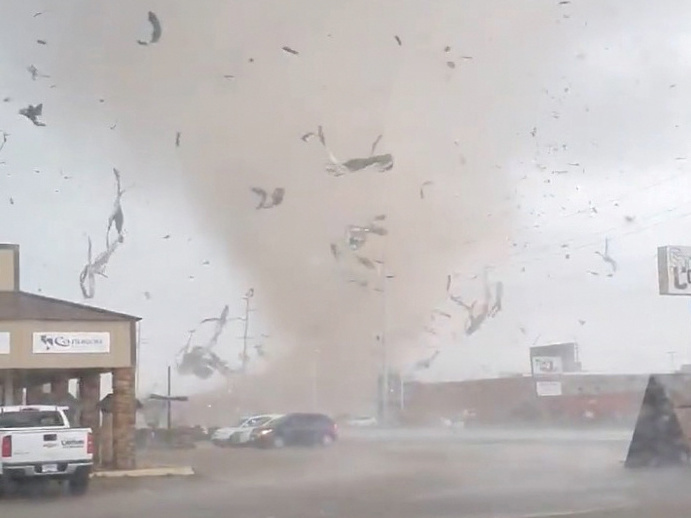 A screen grab from a social media video shows a tornado tearing through Jonesboro, Ark., on Saturday.

A tornado tore through nearly 20 miles of the city of Jonesboro, Ark., on Saturday evening, severely damaging multiple properties and injuring at least 22 people, according to local news reports.

Videos and photos posted to social media show extensive damage to large swaths of the city, including to a municipal airport and a local shopping mall. But despite the strength of the tornado, there have been no reports of fatalities and city officials attribute that, and the relatively low number of injuries, in part to the social distancing guidelines and business closures caused by the coronavirus pandemic.

“Had we not had that here now, I would say you would have had a lot more people in that mall and we would have had a much worse situation than we have now,” Jonesboro Mayor Harold Perrin told local television station KAIT 8.

Though Arkansas Gov. Asa Hutchinson has urged Arkansas residents to stay home whenever possible to prevent the spread of the coronavirus, he has not ordered the state’s non-essential businesses to close or ordered residents to stay at home, an action which has been taken in at least 26 states. Perrin, who ordered a 7 p.m. curfew after the tornado, said that people in his city have been taking the pandemic seriously. Jonesboro, located about 130 miles northeast of Little Rock, is home to more than 75,000 people.

Jonesboro Police Chief Rick Elliott echoed Perrin’s sentiments that actions taken to curb the pandemic may have helped the city avoid a larger injury count, but he also urged residents to continue social distancing despite the crisis, specifically saying not to leave their homes in the aftermath of the tornado to survey the damage it wrought.

“Stay in shelter, which you should be doing anyway, and be thankful that it wasn’t worse than what we’re looking at,” Elliott told KAIT 8. The police department also opened four shelters throughout the city to house people affected.

Several other tornadoes were reported Saturday in other parts of Arkansas, as well as Iowa and Illinois, according to the National Weather Service. Earlier that day, the Weather Service had warned of severe weather in the Midwest and down the Mississippi Valley.

Though the pandemic closures may have kept people safe by keeping them away from the commercial center where the Jonesboro tornado hit, staying at home may not always be the safest place during a tornado if a home’s structure isn’t sturdy. The Centers for Disease Control and Prevention recommends moving to a basement or inside room without windows, and to seek shelter in a nearby building if you live in a mobile home.

0 0 0 0
Previous : How Russia’s Troll Farm Is Changing Tactics Before the Fall Election
Next : Coronavirus Taunts Evoke a Painful History for Asian-American Leaders